Ten years ago, a proposal to build a tax-funded event center on the vacant northwest corner of downtown Kalamazoo went nowhere. In 2018, a group organized by Southwest Michigan First came up with the same idea a second time, but the County Board showed no interest in it. It has recently resurfaced in the context of a possible land-swap between the County and the West Michigan Cancer Center. An event center might be a good thing, but in 2019, suggesting that it be built in Arcadia Commons West suggests a lack of attention to what has changed since 2009.

Kalamazoo may or may not need, and benefit from, a sports/music/event center of the kind proposed by Southwest Michigan First. It sounds like a reasonable, attractive amenity to have in a metropolitan center, if it can be funded in a way that is acceptable to citizens across the city and county.

However, the proposed site in Arcadia Commons suggests more attention to where undeveloped space is available downtown than to what an appropriate, connected future should look like – for Arcadia Commons, downtown, and its adjacent neighborhoods.

If the County and the Cancer Center swap their undeveloped Kalamazoo Avenue properties, the construction of the new, unified County courts building will leave a four-block rectangle of downtown open for development. Keeping that open space intact, rather than putting the new courthouse in the middle of it, makes sense to us. It buys our community time to find the right future for that part of Kalamazoo.

Photo: Google 3D image, looking north from across Bronson Park to the proposed Arcadia Commons event center site and beyond. The site sits at the intersection of downtown, the Northside neighborhood, and the Stuart neighborhood. 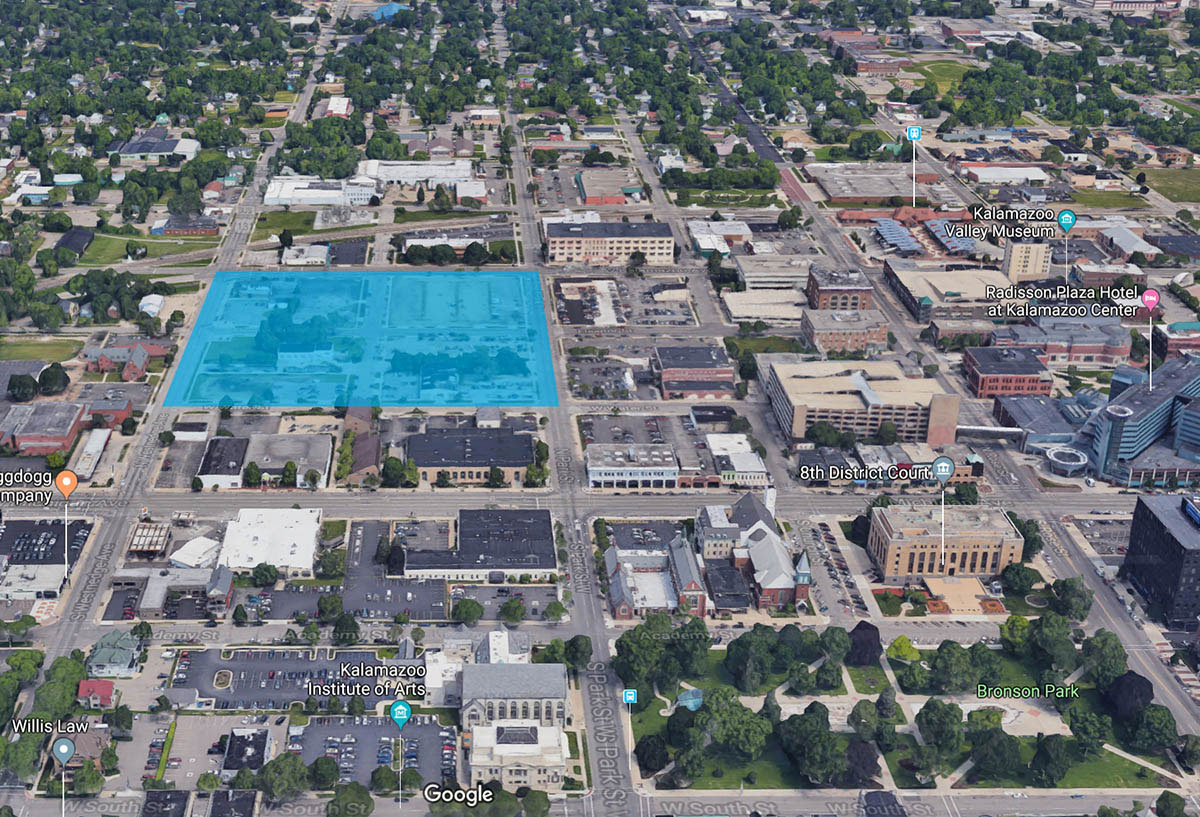 The area in question sits at the extreme northwest corner of the downtown business district, across the street from the Northside and Stuart neighborhoods.

Despite the proximity, connections between this corner of downtown and those neighborhoods are tenuous. This area has been functionally isolated for decades by one-way streets and the rupture created by the “Michikal Street” workaround (for all those one-way streets). Arcadia Commons is one of the places in Kalamazoo that most obviously needs to become a more organic neighborhood connection point in the future.

A multi-acre event center and parking structure are clearly the opposite of that necessary connection. It would be more like a wall, a permanent division at a place in our city that is already too divided. 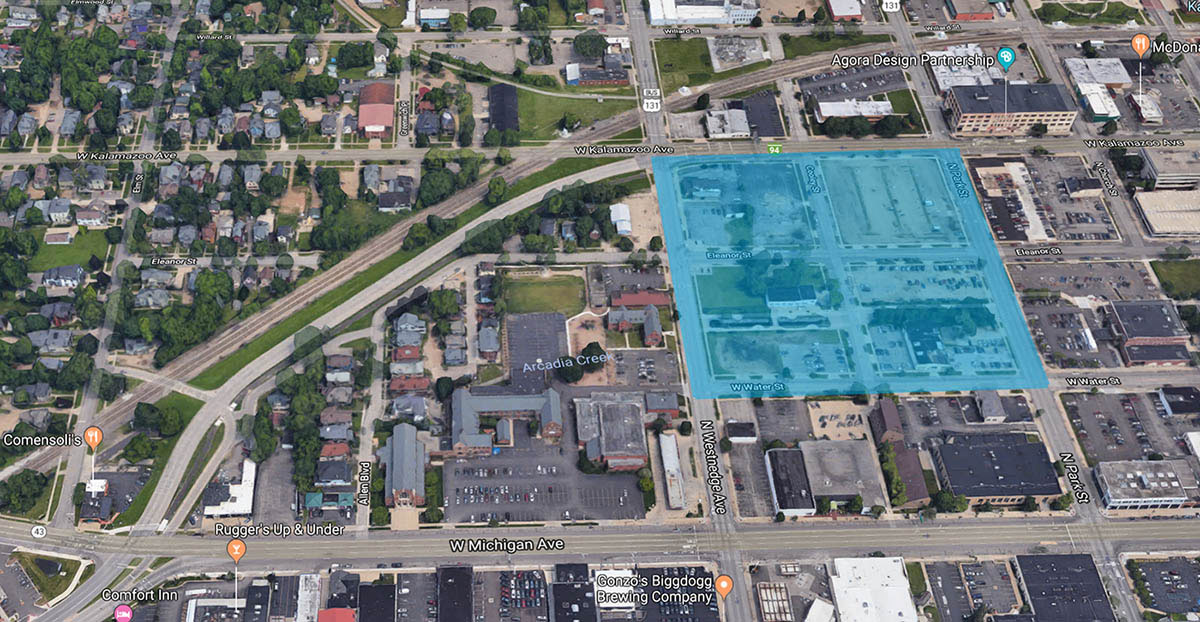 A vocal proponent of the plan back in 2009, described the problem accurately. Ken Miller, then chairman of the Western Michigan University board of trustees and owner of Millennium Restaurant Group in Kalamazoo, argued that a stadium was the only solution, because:

It’s still a shame, but that was then, and this is now. In 2019, there is reason to hope that real solutions to the underlying problem of disconnection are being considered, right now, by the city planners and the Imagine Kalamazoo/2025 Master Plan process, which began in 2017.

City planners are investigating switching downtown’s major streets back to two-way. Two-way traffic on Kalamazoo, Westnedge, and Park would make the Arcadia Creek West area as easily accessible to traffic – from any direction – as any other downtown area. Conceivably, new two-way traffic patterns could also eliminate the need for the Michikal Street cut-through, which would allow for the reconnection of northwest downtown to the Stuart neighborhood. 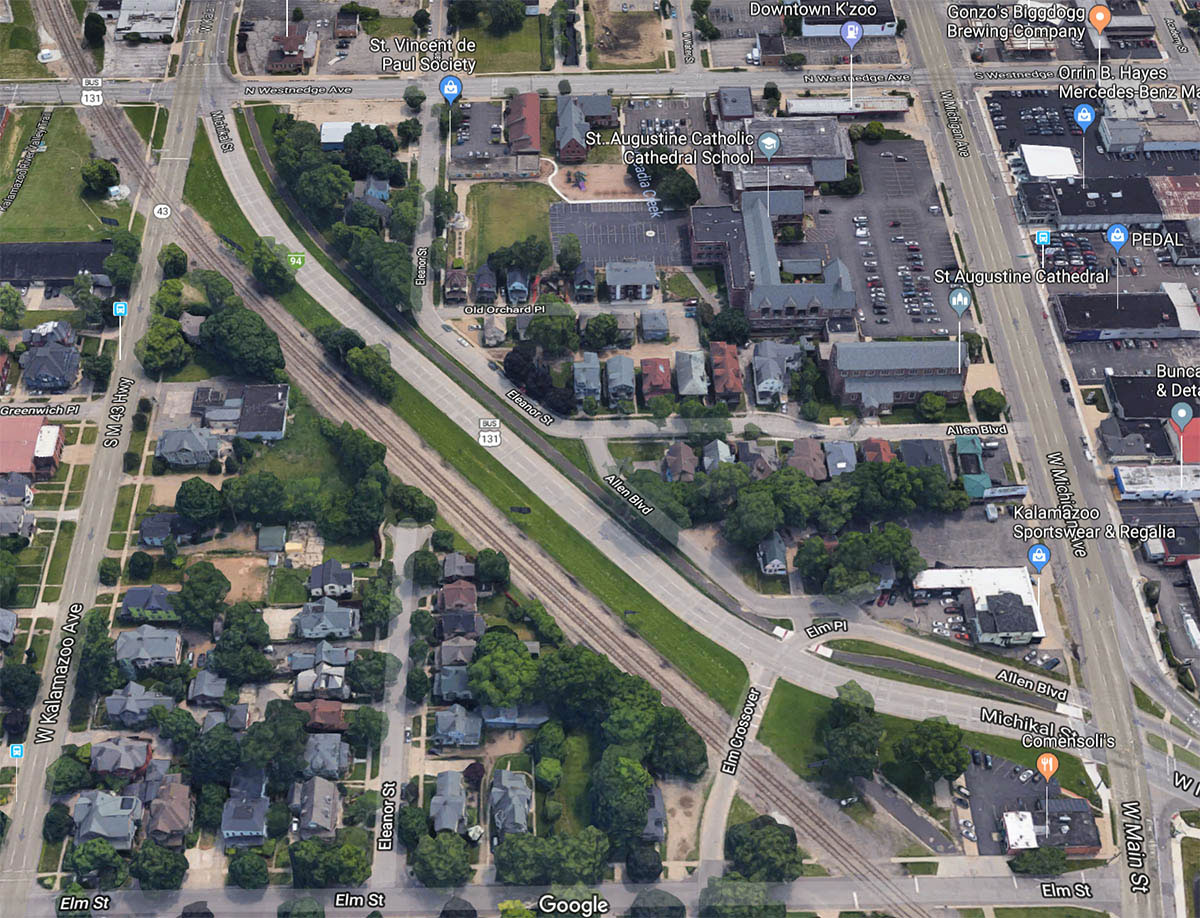 Such changes could be a game-changer for what is possible in Arcadia Commons and for ongoing growth and development that would steadily bridge the gaps between downtown and its adjacent neighborhoods.

Development of Arcadia Commons on that basis could easily include commercial space meant for all of the neighborhoods adjacent to it and include affordable housing units for those at or below the area median income of about $14,000 a year. Who should be served by this area? Downtown? Northside? Stuart? Yes.

The question of (much needed) affordable housing versus taxable gentrification comes up, briefly, every time there is a downtown development deal moving through local government. The vast, nearly-vacant space in Arcadia Commons is a blank canvas for proactive, creative thinking about this question. A planned development in the Edison neighborhood suggests what is possible.

Those who continue to advocate for an event center in Arcadia Commons seem disconnected from such considerations, from the principles of the 2025 Master Plan, and from the collaboration that has been going on between the city planners and the neighborhoods, since 2017. The way they Imagine Kalamazoo is a decade out of date.

Arcadia Commons is not an abstract real estate deal waiting to happen for a few people and organizations. It’s an actual place in our city, the development of which presents real, long-term opportunities for the people who live near it, or could live and work in it.

Those opportunities deserve to be pursued thoughtfully, with proactive, collaborative involvement by every stakeholder who will be impacted by the future we choose to pursue for a gigantic piece of downtown Kalamazoo.