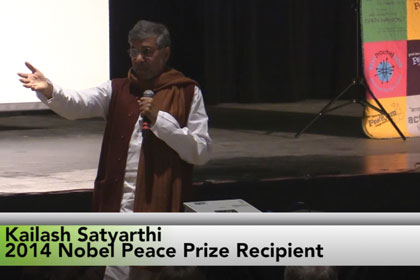 2014 Nobel Peace Prize winner Kailash Satyarthi was the featured speaker at Kalamazoo's 2019 Peace Jam. He also met with students, parents, teachers and other members of the community at Loy Norrix High School. Public Media Network produced a video about the event, including parts of the inspiring talk. Satyarthi is a leading advocate to end child slavery in India. Satyarthi has helped free more than 87,000 child slaves through his organization Bachpan Bachao Andolan (Save Childhood Movement). He is also the founder of the Global March Against Child Labour. 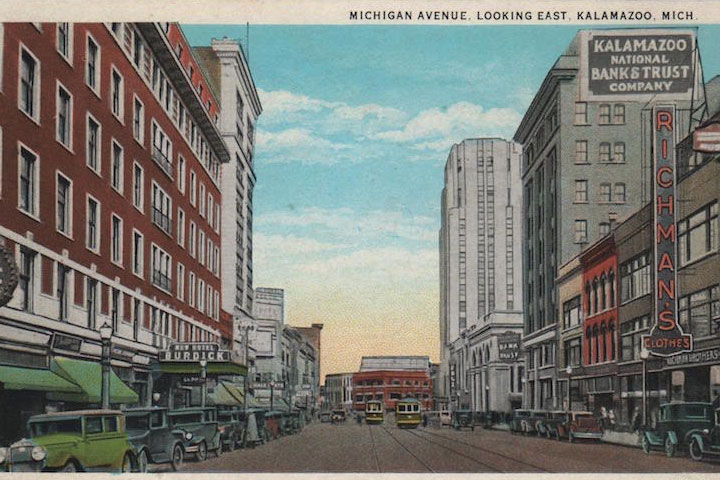 Second Wave has written the most extensive article we've seen about changing streets and traffic patterns downtown. In it, city planner, Rebekah Kik, talks about the possibilities: The first project "is going to have to be a portion of Stadium Drive to West Michigan," with consideration of a protected bike lane on Michigan Ave., realigning Academy St., and two-way traffic on South and Lovell. "There's something about that gateway element, and being able to get South and Lovell into two-way, and really reduce the speeds as you're coming into the city." Regarding Kalamazoo Ave. between Westnedge and Douglas: "Could we turn that to two-way traffic, like, tomorrow?" 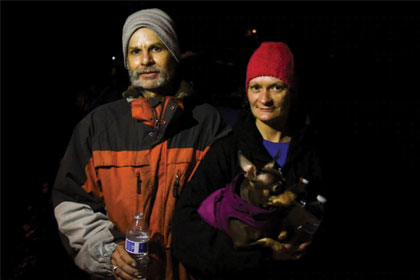 Veiled behind trees near a quiet neighborhood street, Butch Austin, Carla Hofacker and their two dogs are surviving winter inside an abandoned minivan. Austin said they bear “unbelievable cold” each night by the heat of a kerosene heater, staving off hunger and discomfort behind tarps draped over missing doors and windows. An hour after the sun set on Feb. 20, social workers on a street outreach team brought the couple blankets, water and other supplies. Finding the hidden places people seek shelter is part of the daily job for staff in the housing department at Kalamazoo County Mental Health and Substance Abuse Services.

Kalamazoo Downtown Partnership announced its new Citizen Coalition of 2019 Monday, in an effort to look towards the future of the area. The new community leadership group hopes to create more diverse programs and services by gathering input. 76 people were selected to collaborate together and help make downtown Kalamazoo a more inviting place for everyone. More than 130 people applied. The group was designed to focus on areas of impact key to the success of downtown. The goal is for the diverse group to brainstorm ideas to expand people, places, experiences and growth for the area. 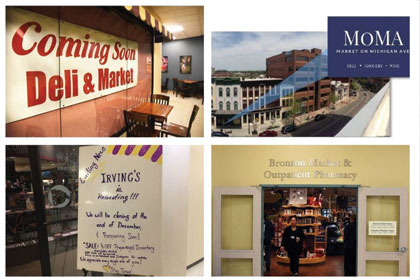 As KNM noted some time ago, grocery stores of various size are popping up in and around downtown Kalamazoo, possibly, but not reliably, filling in previously-identified food deserts. MLive provides a thorough update, missing only the fact that the Northside's Park Street Market has been thriving for the better part of a decade. Downtown groceries will help define the liveability of downtown Kalamazoo and its various economic stakeholders. 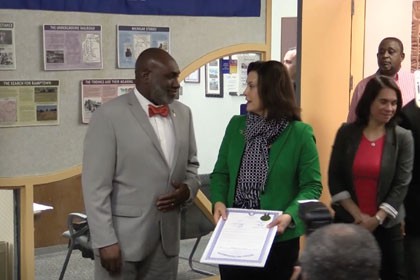 The Douglass Community Association is 100. Catch up with it in three minutes.

Michigan Governor, Gretchen Whitmer, came to Kalamazoo’s Douglass Community Center to deliver a tribute to the organization on its 100th anniversary. Kalamazoo’s Public Media Network (PMN) took the opportunity to create a short documentary feature on the visit and on the association’s history and current community activities, with help from new Executive Director, Sidney Ellis. 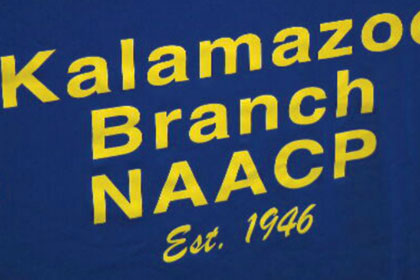 Kalamazoo NAACP focuses on transparency amid allegations against former president

WWMT:  The Metropolitan Kalamazoo NAACP wants to improve relationships with the community amid an ongoing sex crimes investigation involving its former president. The organization elected a new leader with a new vision and would like a second chance. Friday night newly-elected president Wendy Fields hosted a meet and greet open to the public. "My immediate goal is simply restoration. Restoration of relationships, restoration of trust, rebuilding of community partnerships," Fields said. 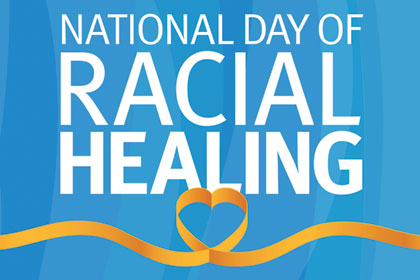 Following a cancellation due to winter weather conditions, the Kalamazoo National Day of Racial Healing event will now be held from 5:30 p.m. to 8 p.m. Tuesday, March 5, at the Girl Scouts Heart of Michigan’s Kalamazoo Regional Center, 601 W. Maple St. in Kalamazoo. The free, family-friendly event will feature music, poetry, dance and the sharing of stories and food. It also doubles as the launch of a series of racial healing initiatives throughout the Kalamazoo community.

A few boxers, already with mouth gear in and hands taped, were in the zone as they paced around the gym, while a few older men, likely former boxers, threw a few air jabs or fist-bumped an old friend. The crowd waited quietly, calm and slightly pensive. At last, the announcer introduced a recently graduated Western Michigan University musical theater student who sang a moving rendition of the Star Spangled Banner. Then a St. Mary’s parish member and former boxer said a few quick words, praying for “good, clean fights,” and the show began.

WWMT: With hopes of helping fill the growing need for skilled workers in West Michigan, Michigan Works Southwest has decided to launch a new trade skills apprenticeship: Vision for Prosperity Apprenticeship Readiness Program. The organization said they will accept applications for the apprenticeship program until Feb. 22, 2019. The apprenticeship requires students to complete a nine-week course, which involves 360 hours of hands-on training in skilled trades. Organizers said training could lead to jobs in carpentry, construction, pipe fitting, plumbing and more. The apprenticeship would also teach people how to do construction math, read blueprints, visit job sites and other tools. 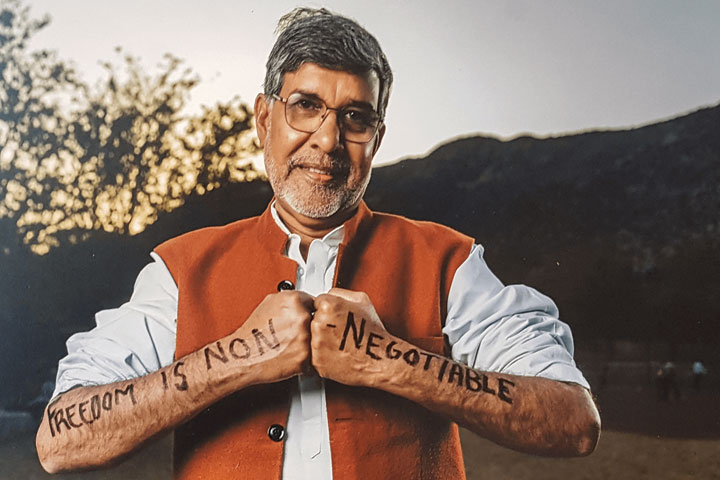 KPS: Loy Norrix High School will host a lecture by 2014 Nobel Peace Prize Laureate Kailash Satyarthi at 7 p.m. Friday, Feb. 22, in the school’s Kasdorf Auditorium. Satyarthi is a leading advocate to end child slavery in India. Satyarthi has helped free more than 87,000 child slaves through his organization Bachpan Bachao Andolan (Save Childhood Movement). He is also the founder of the Global March Against Child Labour. Satyarthi’s lecture “Free. Safe. Educated,” will provide a unique opportunity for those in the greater Kalamazoo area to learn about him and his struggle to expose the system of child slavery that exists worldwide and how he has created movements to help children to be free, safe and educated. 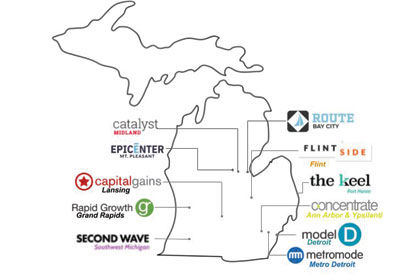 2NDWAVE: One of Kalamazoo's most essential news sources is Southwest Michigan's Second Wave, which provides in-depth community reporting on the deeper fabric and ongoing initiatives of our city. Without Second Wave, the local news beyond weather/traffic/crime would be dramatically diminished. Second Wave and all the Michigan publications of its parent organization, Issue Media, have been invited to join the Michigan Press Association - a recognition of their crucial role in keeping our state, and city, informed. 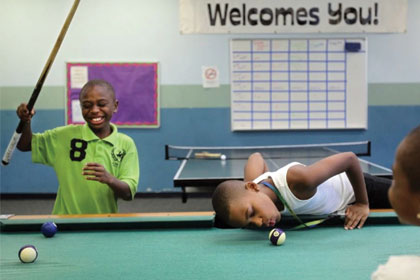 A yearlong, 100th anniversary celebration of the Douglass Community Association kicks off at the end of February. The Association is one of the oldest social services agencies in Kalamazoo for people of color, having begun service to the Northside neighborhood on July 1, 1919, on North Burdick Street. The association works to empower residents and to enhance their quality of life. “Now is a time to reflect on the meaningful work and 100 year legacy of the Douglass," said Sidney Ellis, executive director. The planned events include a Memorial Day celebration, an ice cream social and a summer carnival. 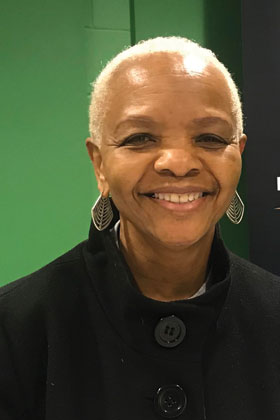 WMUK: Wendy Fields was sworn in last week as the new president of the Metropolitan Kalamazoo Branch of the NAACP. She hadn't plan to run. "I was sought out by community leaders, by pastors and community members. People were hurting," Fields said. Taking over from former president, Strick Strictland, she had most recently been first vice president. The lifelong Kalamazoo resident and Hospice of Kalamazoo of Southwest Michigan board member has a long record of activism with social justice issues. She worked for Kalamazoo County government for 39 years. 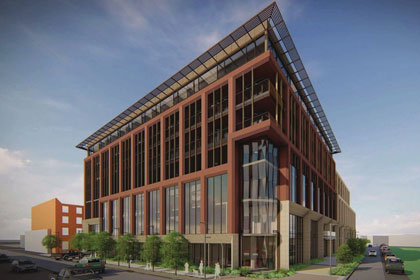 WWMT: Andrew Haan, president of the Kalamazoo Downtown Partnership, said they are working with developers to bring more affordable apartments to the downtown market. "We want to make sure that as a community investing in new projects, that they are accessible to all the different income ranges in the community," Haan said. "So that's going to be a big focus in the next you know, two, three, four, five years." Patti Owens, managing director of Catalyst Development Co., said, "The most successful cities have a broad range of residents, and so in our 45 apartments at 180 East Water St. (shown in photo), we're going to do half of those as affordable housing."