Trio of Broncos in the running for 2019 Hobey Baker Award

Fan voting for college hockey’s top player opened January 16. The first phase of fan voting for the 2019 Hobey Baker award will run until March 10th. The list of potential finalists includes three Western Michigan Broncos. Colt Conrad, Hugh McGing and Josh Passolt are among the 81 players to make the original list of athletes.

Portage Central has found itself ranked 6th in the state in Division 2. The Mustangs have been perfect in their head-to-head meets in the early going of the 2018-19 season.

The Associated Press released its latest boys and girls high school basketball rankings on Tuesday, and several Kalamazoo-area teams are listed among the state's best in their respective divisions. Some are undefeated, while others are just starting to hit their stride in 2019.

The Michigan High School Athletic Association (MHSAA) said it's getting harder to retain officials because of abusive fans in the high school arena. MHSAA spokesperson John Johnson said there are three reasons why referees and umpires are choosing to leave the ranks or not sign up at all: life events, like a new child, moving out of state; local high school officiating politics; and adult behavior and poor sportsmanship. 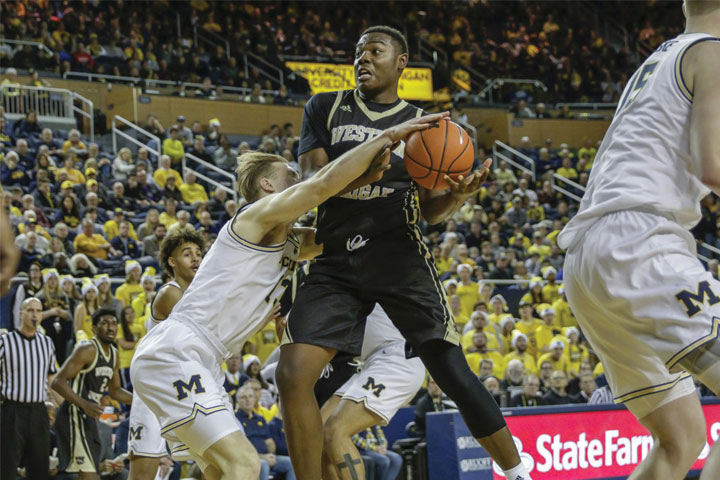 Western Michigan defeated UC Riverside on Sunday, 73-64 as they played without their senior leader Josh Davis. The win puts the Broncos at 6-7 on the season as they head into Mid-American Conference play. Sophomore guard Michael Flowers continued his hot streak leading the way for the Broncos with 24 points.

According to a press release from the team, wide receiver coach Ashton Aikens and cornerback coach Nick Sanchez were relieved of their duties and their contracts will not be renewed by the team. WMU ranked 30th in total offense in FBS during the 2018 season and third in the Mid-American Conference, averaging 447.2 yards per game. Out of the 52 touchdowns scored by the offense, 20 were receiving touchdowns, with 15 being scored by wide receivers. Bronco wideouts averaged only 14.6 yards per catch on the season.