Only 25% of Michigan teachers recommend the job

Most teachers wouldn’t recommend that their students follow in their footsteps, according to a recent Michigan survey. Launch Michigan, a diverse coalition of groups that come together to advocate for education changes, reports that 75% of Michigan educators would not recommend education as a career. That contributes to the challenges of recruitment and retention, experts say.“People go to a university for four years and even get graduate degrees in education and still don’t get paid enough,” said Brian Reattoir, the superintendent of Brimley Area Schools in the Upper Peninsula.. “It’s a 10- to 12- hour day for many teachers. And changes to retirement plans for teachers also have really pushed people away from the field.”

Local newspapers in Michigan continue to close or shrink. Ionia's Sentinal Standard cut its print edition to two days a week in February. Menominee County and Keweenaw County have no local  newspapers. MLive cancelled seven weekly suburban Grand Rapids publications in January. Other Michigan papers have disappeared in recent years, including the Bronson Journal in Branch County, the Michigan Citizen in Detroit and the Advisor & Source Newspapers in Macomb and Oakland counties. Spartan News Service provides coverage of the statewide crisis. 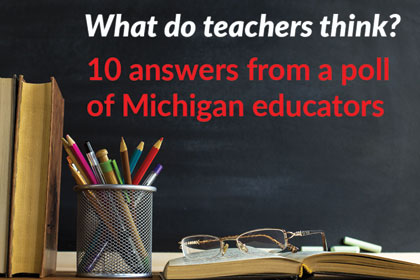 A Launch Michigan online poll of 16,000 Michigan teachers, administrators, support staff and para-professionals may be the largest ever conducted of Michigan educators. It revealed key problems experienced by educators and revealed divides between professionals and Lansing legislators. Meanwhile, state Social Studies standards have been revised to reinsert information that the GOP recently cut out of them – such as climate change, gay rights, and Roe v. Wade. Read more at the link about educator priorities and what went back into the textbooks. 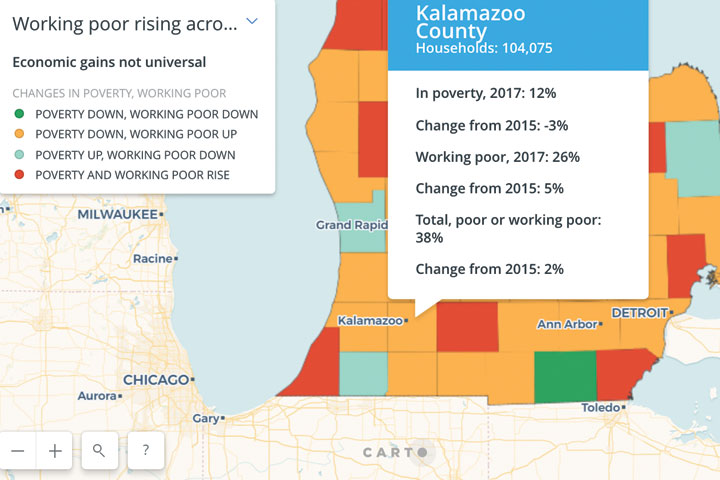 Study: A deeper dive into Michigan's poor and working poor

Michigan’s economic recovery has been uneven. Poverty is down in many places but the percentage of the working poor has continued to rise. More Michiganders, especially seniors, are struggling to afford basic needs, from food and housing to child care and transportation. That’s the conclusion of a new report from the Michigan Association of United Ways, released Wednesday, that aims to identify the barriers the working poor — which the group identifies as ALICE, for “asset-limited, income-constrained, employed” — face in making ends meet. This year’s report, using data from 2017, suggests there may be a silver lining amid the clouds: While 29 percent of Michigan’s 3.9 million households are considered to be ALICE, up from 25 percent two years earlier, a smaller percentage of households are living in poverty (14 percent, from 15 percent two years ago). 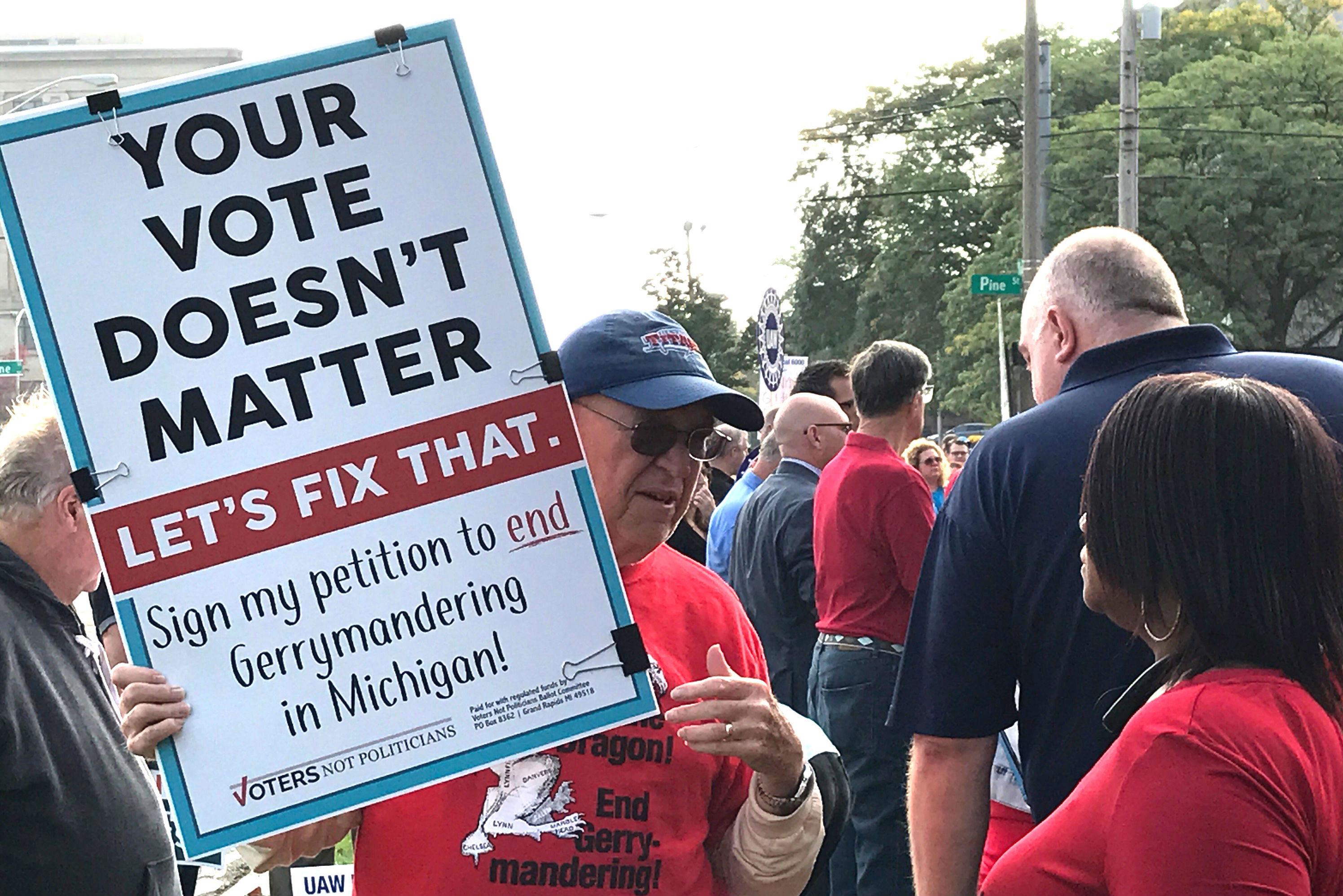 Michigan 2020 voting districts in the hands of three state judges

The final arguments are in. Now, it’s up to three federal judges to decide whether Michigan’s political districts were unconstitutionally gerrymandered and new lines should be drawn for the 2020 election. Lawyers in the bitterly contested case over Michigan’s 2011 redistricting process late Friday submitted more than 650 pages total of “findings of fact” and “conclusions of law,” rehashing arguments and evidence. 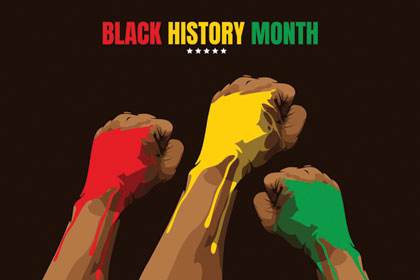 The miseducation of Michigan: How state fails kids in black history

BRIDGE OPINION: My son was in school for barely 15 minutes on the first day of this trimester when he snuck his cell phone out of his pocket and sent me a text. “This a part of the curriculum…,” his text message read, and he attached a photo of a page from the syllabus. It read, “Unit 4- From Civil Rights to Today”:

These were the planned classroom topics the teacher listed to cover the past 50 years of African-American history: an R-rated fictional movie about gang banging, a documentary about gang banging and a reading on mass incarceration. 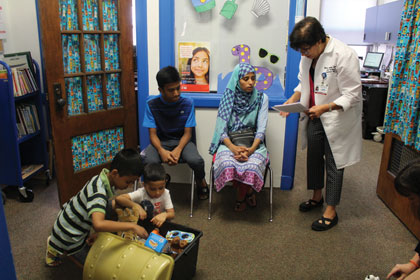 As Michigan immigrants struggle to get healthcare, nonprofits fill the gaps

2ND WAVE: Michigan immigrants face many barriers to health equity. Immigration status, stigma, language and cultural differences, and uncertainty and stress about changing laws and regulations all play a role in immigrants' ability to achieve good health. Anna Hill, attorney for the Michigan Immigrant Rights Center, gave an example of what some face. "Parents are being asked about where they're from and other questions meant to intimidate or harass them, or frighten them away from seeking benefits for their children who are eligible and need basic support," she said. Second Wave talked to Michigan non-profits who are providing that support.

MI Transportation Director: At least $1.5B more needed for highways

AP: Michigan interstates and highways need at least a $1.5 billion annual influx of additional spending to be brought into better condition, nearly double the current funding, the state’s new transportation director, Paul Ajegba, told lawmakers on February 5. The number does not include an estimate of additional funds for municipal roads and bridges, which the Department of Transportation is working to compile. “The problem is we really have not invested enough money in our roads,” said Ajegba. 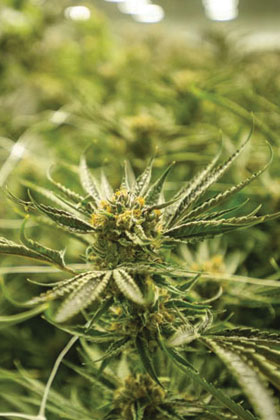 AP: Health and industry experts in Michigan are raising concerns about caregiver-produced medical marijuana following the discovery of more than 50 pounds of contaminated product. Patient caregivers grew a majority of the marijuana that was recalled in January from provisioning centers in Detroit, Lansing, Jackson, Kalamazoo and Ypsilanti, The Detroit News reports reported. The products, such as marijuana flower, concentrate, patches and tinctures, contained chemical residue, E. coli, arsenic, cadmium and salmonella.

MDOT director on crumbling roads: 'We don't have the money to build it right'

Paul Ajegba, the new director of the Michigan Department of Transportation, told the Free Press on Tuesday that MDOT doesn’t always fix roads the way they should be fixed because “we don’t have the money to build it the right way.” It's a message that may not fit with what many Republican lawmakers — who are looking for vastly improved results with existing funds as a $1.2-billion road funding deal moves toward full implementation — want to hear. But it's not inconsistent with messages sent by Democratic Gov. Gretchen Whitmer, who, during her campaign, discussed using hikes in user fees or borrowing to raise $2 billion in extra state road funds that she hopes can leverage another $1 billion in federal money.

But seven months later, the fate of the regulation is anything but certain. Detroit-area water providers are trying to thwart the rule in the Michigan Court of Claims. Filed in mid-December, their lawsuit calls new requirements under the rule “arbitrary,” too costly and ineffective for addressing Michigan’s most serious lead threats. Public health advocates are outraged. 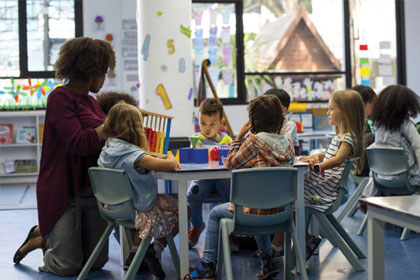 Child care, an issue that wasn’t on the political radar a decade ago, could become one of the major issues facing the administration of newly elected Gov. Gretchen Whitmer. The number of interest groups wanting to address Michigan’s notoriously stingy child care funding is reaching critical mass, from educators to business CEO’s to a bipartisan crop of new legislators who are attuned to the issue. The groups are pushing for more child care aid for Michigan’s low-income working families, including the allocation of $63 million in unused federal child care dollars, as well as possible additional funding from the state. 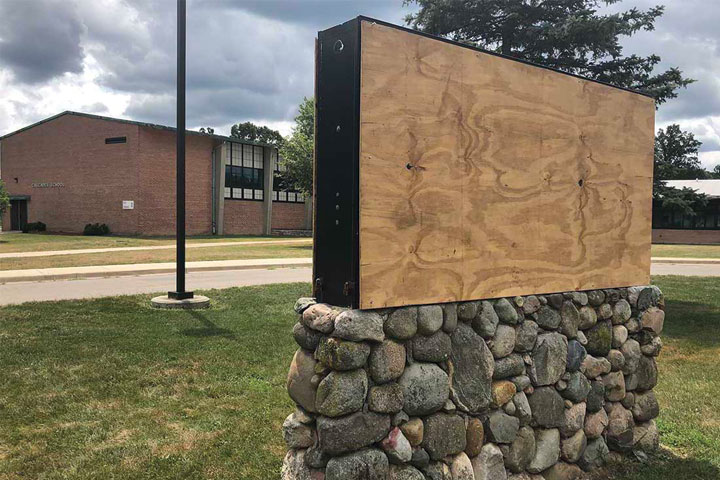 Michigan ranks dead last in the nation in school funding growth in the quarter century since Michigan radically changed how it funded public education system, according to a new Michigan State University study. School funding has dropped 18 percent since 1995. Michigan ranked 48th in per-pupil spending growth over the same period. Since proposal A passed in 1994, Michigan citizens gave most control over school funding to the state. Since 2002, the funding has dramatically failed to keep pace with inflation. (Bridge) 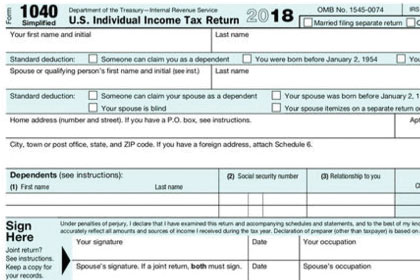 Many low and middle income Michiganders might not be aware of tax preparation assistance programs. The average Michigan tax return costs $150, but that's not the only money families are saving. The tax preparers also find ways to keep people's tax bill lower. A statewide program is available to all households making $60,000 or less. The United Way also partners with a free do-it-yourself tax program. WWMT provides details and links.